Amy Schultz has helped patients stay out of the hospital for the past 16 months.

The job keeps the registered nurse out of the hospital, where she once worked as an oncology nurse.

“Doing those transition-of-care phone calls, that’s a large portion of our job. But we also do a lot of patient education,” said Schultz. “As a hospital nurse, you give the discharge instructions and send the patient out the door.”

Jobs such as hers and others in the industry are increasing because of the law’s focus on prevention to improve people’s health and lower costs. And the number of jobs is increasing because more people are gaining health insurance.

It’s part of a changing employment landscape in the health care industry, the leading source of added jobs in America. Doctors’ offices, outpatient centers and home health agencies are adding jobs, but many hospitals and nursing homes — still major employers but costly places to provide care — have frozen hiring or laid off workers.

About 8 million people signed up for coverage under the law since October, according to the White House.

“Demand for health care services is going up because more people are covered, so the need for more people (working) in health care will go up,” said Stuart Hoffman, chief economist for PNC Financial Services Group.

“We’ve been very proactive to be sustainable in the future of health care,” she said.

Hospitals have shed jobs to reduce expenses because of declining revenue. Hospital employment in the state declined by 3,900 positions in February, compared with a year earlier, according to the Hospital & Healthsystem Association of Pennsylvania.

The association surveyed members and found that two-thirds have frozen or plan to freeze hiring. About half have laid off or plan to lay off staff. The survey, conducted last month, received responses from 104 of the state’s 164 acute-care hospitals.

The state’s hospitals will experience an $800 million cut in Medicare payments by the end of this year under changes brought by Obamacare meant to lower health care costs. Cuts are expected to total $10 billion during the next decade, the association said.

Despite those cuts, the industry is expected to add the most jobs by 2022 of any industry in the American economy, according to the Labor Department. The sector is projected to add 5 million jobs a year, or about a third of all new jobs.

Despite the growing number of elderly Americans, nursing homes across the country cut 12,000 jobs in the year ended in March. More seniors stay in their homes longer with the help of caregivers, or move into residential-style retirement homes.

Dorothy Klein started working for Synergy HomeCare in January, providing housekeeping, food preparation and companionship for elderly people in their homes. Klein, 43, of Bridgeville worked for 12 years as an emergency medical technician.

“I lifted heavy people for a long time and couldn’t do it anymore,” Klein said. “I went into this because it’s less physically demanding.”

Mike Luchovick started the Robinson franchise where Klein works three years ago. It has grown to 35 employees, and he expects to employ 50 a year from now.

“There’s more business than I have caregivers to cover,” Luchovick said. 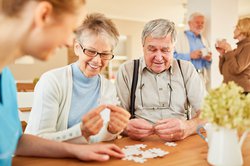 5 Therapeutic Activities To Do With Alzheimer’s and Dementia Patients